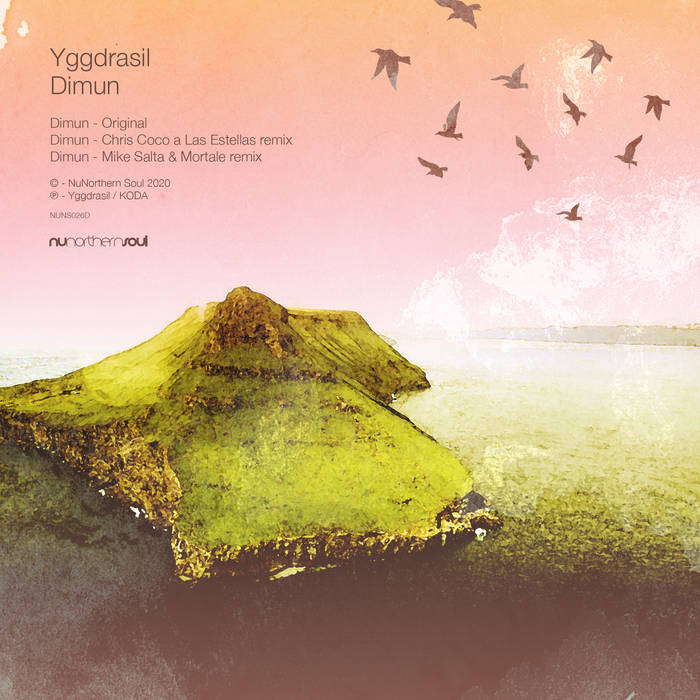 NuNorthern Soul proudly presents Dimun, an overlooked neo-classical / ambient fusion track by Faroe Islands-based producer Kristan Blak’s Yggdrasil project. Label boss ‘Phat’ Phil Cooper was playing G! festival on the Faroe Islands in 2019 and as part of the experience the delegates, artists and DJs where invited to see and experience some of the cultural spots and institutions of the Faroe Islands. One of those was Tutl records owned by Kristian Blak. Tutl records is a wonderful record store and label representing the wealth of amazing Faroese recording talent and has been around for years. tutlrecords.com

Kristian invited a few people to his house and he played the piano line of Dimun, Phil recorded it on his phone and could not stop watching it… He eventually contacted Kristian to ask about the music which led to it being licensed for this release.

Chris Coco take the helm with his dreamy New Age version chilled to the perfect temperature for lost La Torre sunset moments while Mike Salta steps up with studio partner Marty ‘Mortale’ to create an epic 12 minute version with a nod to the heritage and sounds of Cafe Del Mar circa 1998 and with added new flavours of Ibiza al la Mark Barrott / International Feel. To quote David from One Million Sunsets "This is ace, all 3 versions, you could put them together to make one long track. New Age finally making a proper comeback."


[Chris Coco] UK producer, DJ, broadcaster. Whether he’s spinning a club set of classic and future house; getting weird in a back room or poolside with dub disco and Balearic; or masterfully soundtracking an Ibiza sunset, Chris Coco is the DJ with the music to make something beautiful happen. In other decades Chris has been part of seminal house act Coco Steel & Lovebomb; editor / founder of DJ Magazine; co presenter of Radio 1’s late night show The Blue Room; tour DJ for Robbie Williams; and a prolific producer of chillout and Balearic albums.

[Mike Salta] Danish producer, DJ, broadcaster and music connoisseur. Growing up with the late 70’s and early 80’s flourishing electronic influence on music, boogie, funk, disco and italo-disco were the first true vibes fueling a passion that has grown into a lifelong dedication to music. With DJ’ing, music production, talent development, event, club and label management, his entrepreneurship has brought 35 years of experience gathered from engagements all over the globe. As a producer, more than 100 releases under various monikers. Mike Salta today embraces music of all kinds without aiming at a specific genre. Some call it balearic!

Kristian Blak is pianist, founder and the main composer of the group. He has written several large scale works in suite form for Yggdrasil, most of these released on Tutl Records. Yggdrasil is a Nordic ensemble, based in the Faroe Islands. Formed in 1981, it has always included musicians from other countries. ... more

Bandcamp Daily  your guide to the world of Bandcamp